I got to enjoy the world God created for us while on Safari this past week. God made a perfect world for us to live in. Our sin wrecked it. If this is what our sin filled world looks like, I can’t wait to see His perfect world. I’ve heard a lot of Tanzanians say that the oldest bones have been found between the Ngorongoro Crater and the Serengeti. This is also where many people believe the Garden of Eden was located. I don’t think we will ever really know this for sure until we can ask God himself, but as I look out over these two beautiful places I can see it. I can feel it.

“God spoke: “Light!”
And light appeared.
God saw that light was good
and separated light from dark.
God named the light Day,
he named the dark Night.
It was evening, it was morning—
Day One.”

“God spoke: “Sky! In the middle of the waters;
separate water from water!”
God made sky.
He separated the water under sky
from the water above sky.
And there it was:
he named sky the Heavens;
It was evening, it was morning—
Day Two.”

I was fortunate enough to go on Safari with my family and friends the last three days. Wow! We saw the Big Five and so, so much more. 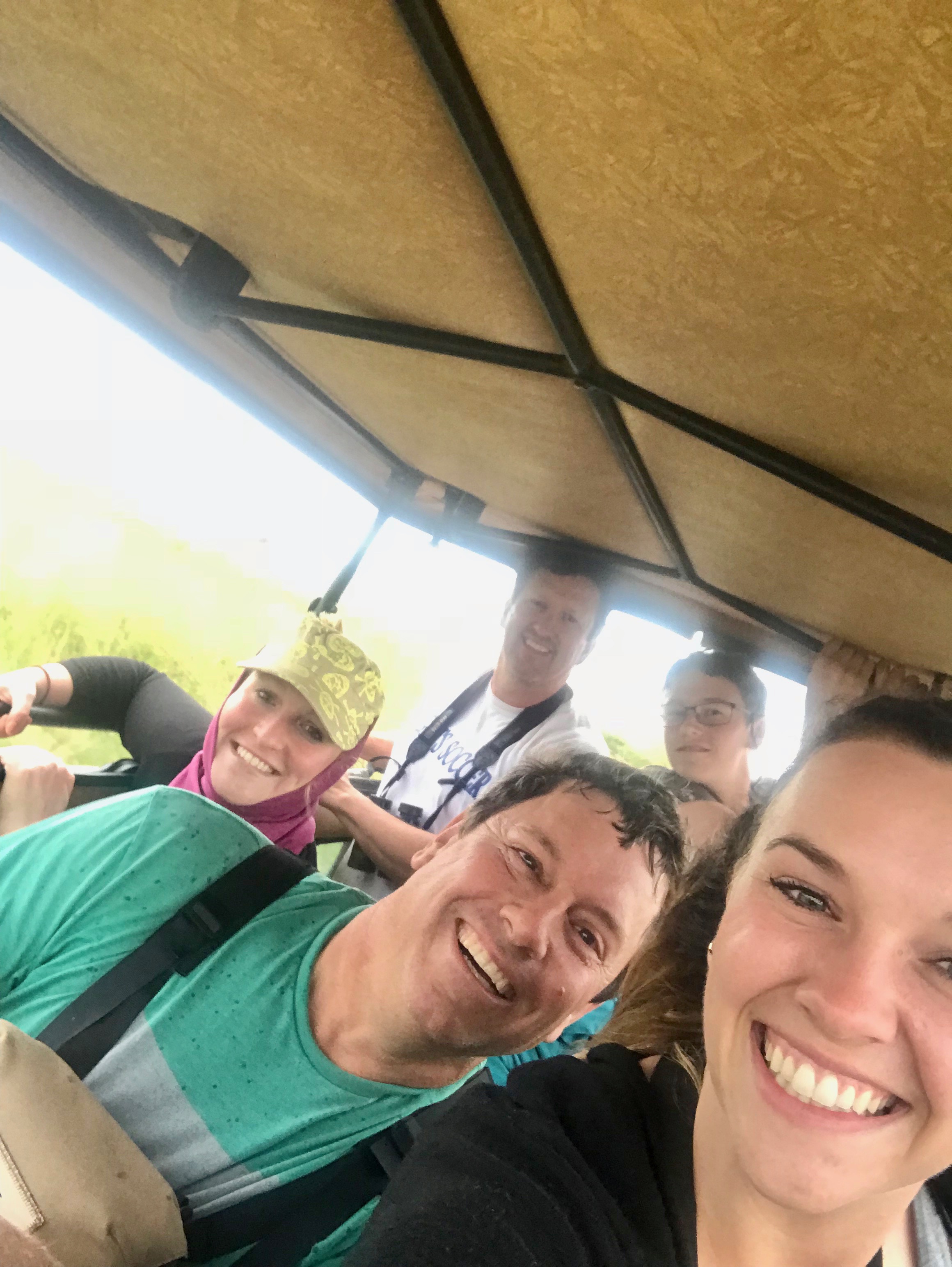 We rode in the coolest Safari car ever where the roof lifts up and you can stand to look around.

Binoculars are a must unless you are Ben, our Safari guide, who can spot things with his naked eye that I still can’t see with binocs. 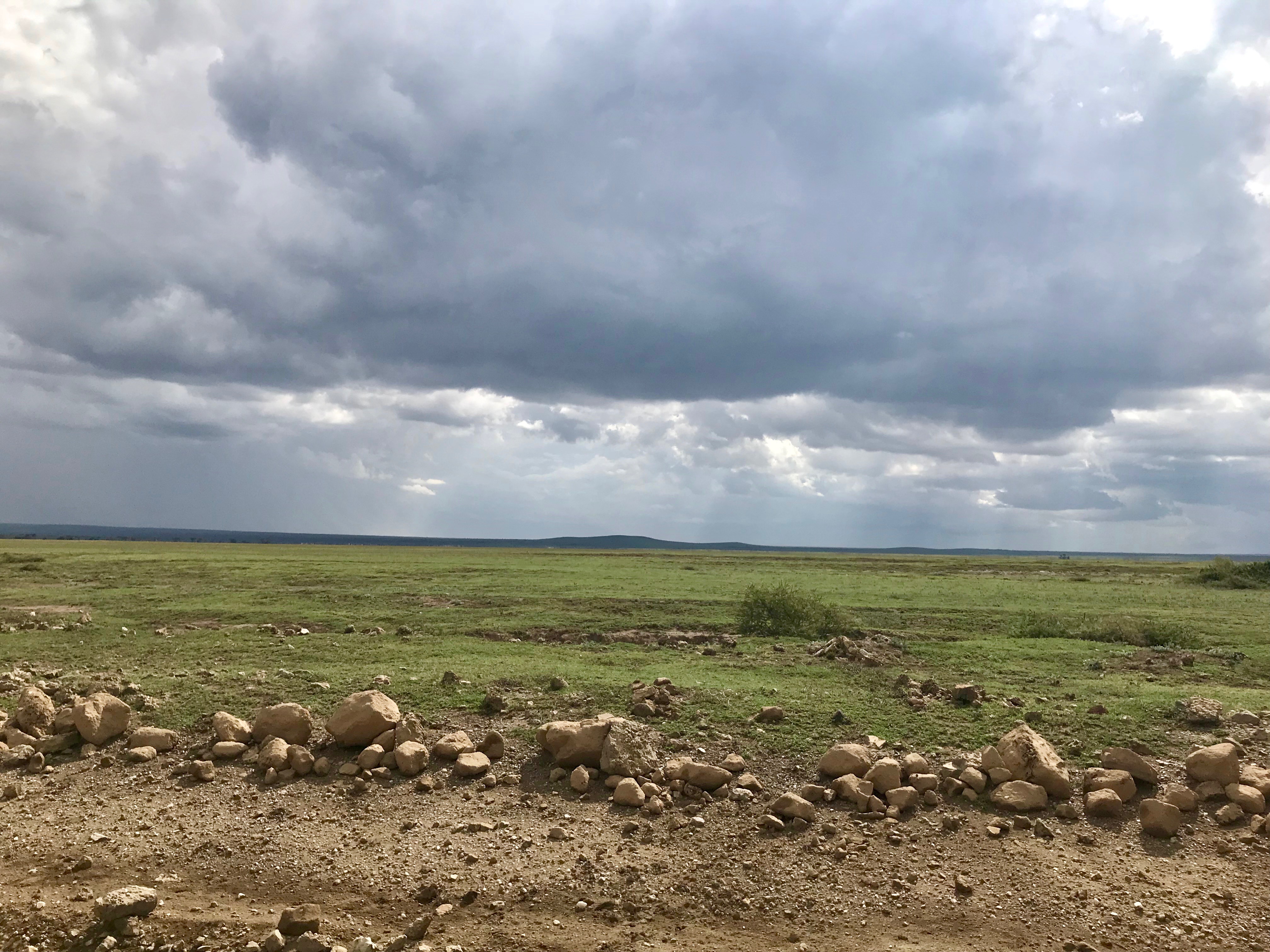 “God spoke: “Separate!
Water-beneath-Heaven, gather into one place;
Land, appear!”
And there it was.
God named the land Earth.
He named the pooled water Ocean.
God saw that it was good.

Wide open plains of the Serengeti.  As peaceful as peaceful gets.

Lions live in prides of about 15. The females do most of the hunting while the male defends the territory. Not pictured is a full grown Giraffe which these three lions had taken down just hours before we arrived. 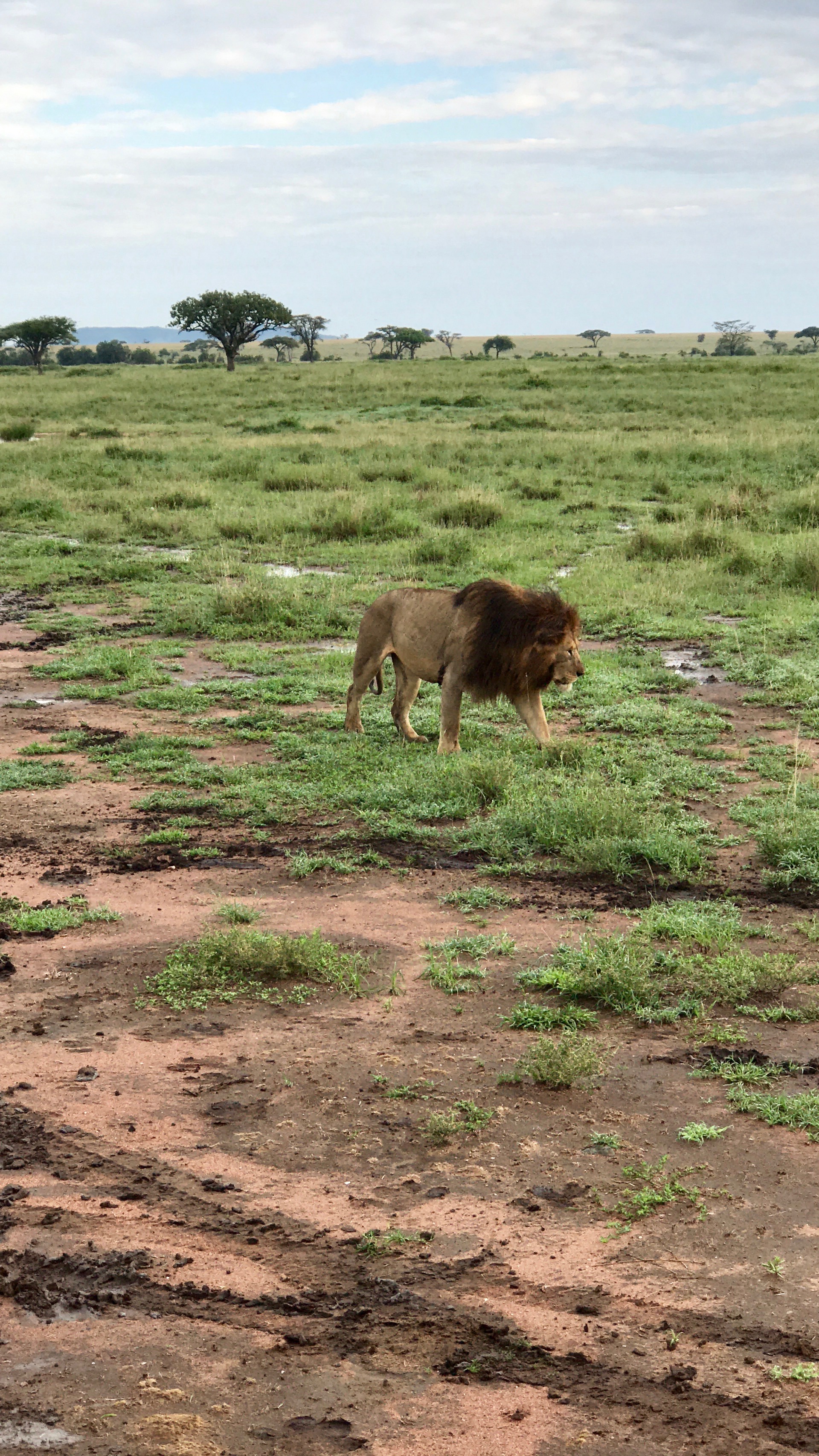 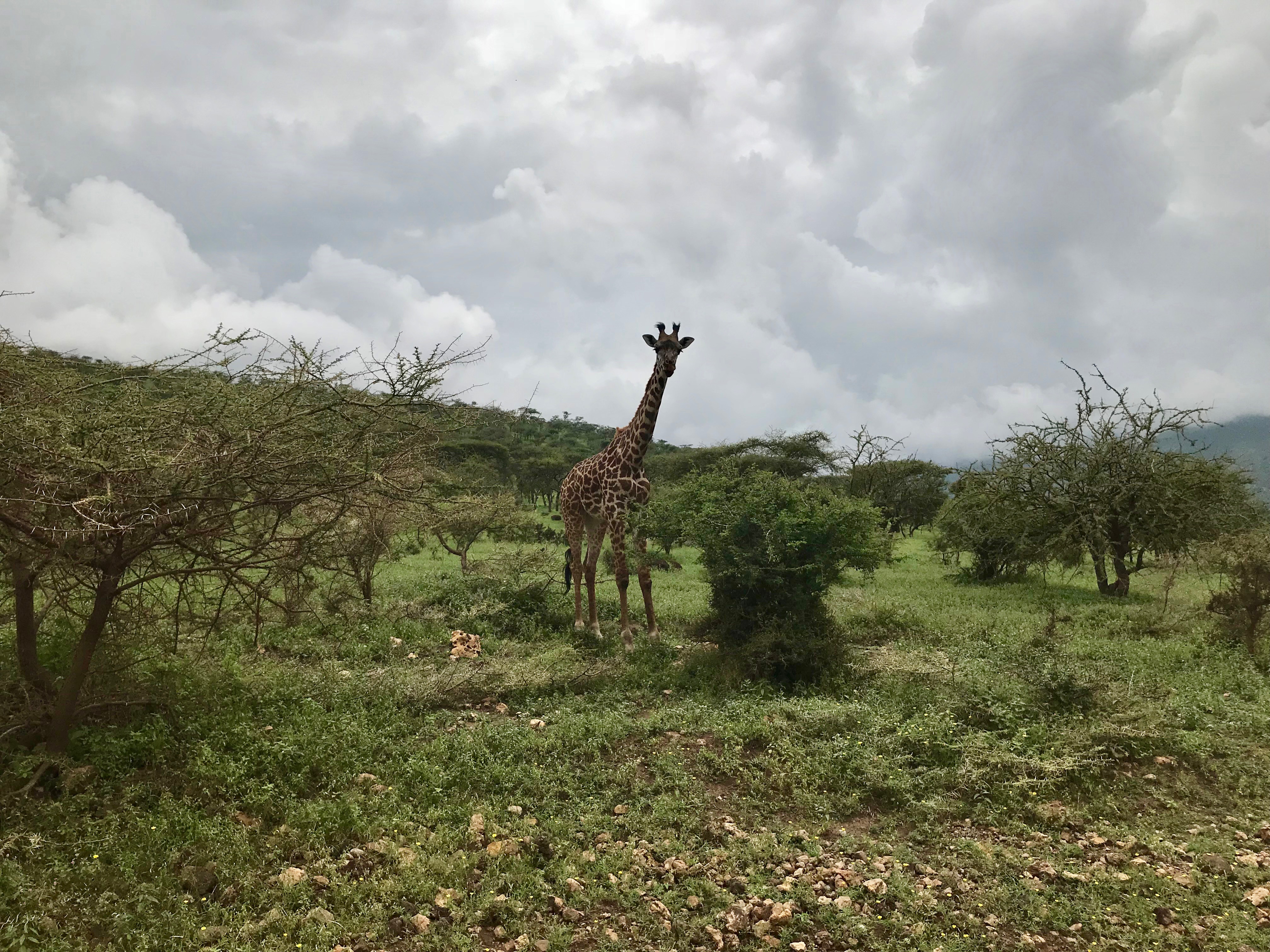 Giraffes are the tallest mammal on earth and their necks are too short to reach the ground. Aren’t they cute?!

Elephants are the largest land animal in the world. They are endangered because they are hunted for their ivory tusks.

Zebras are single-hoofed animals that are, indeed, black with white strips. Not pictured are about a million more Zebras.

Gazelles drink very little water because they can extract moisture from the food they eat.

Cheetahs (my favorite) are the fastest land animal in the world. They can run up to 74 mph – that is pretty dang awesome.

Ya know what else is pretty dang awesome? Spending time with loved ones. 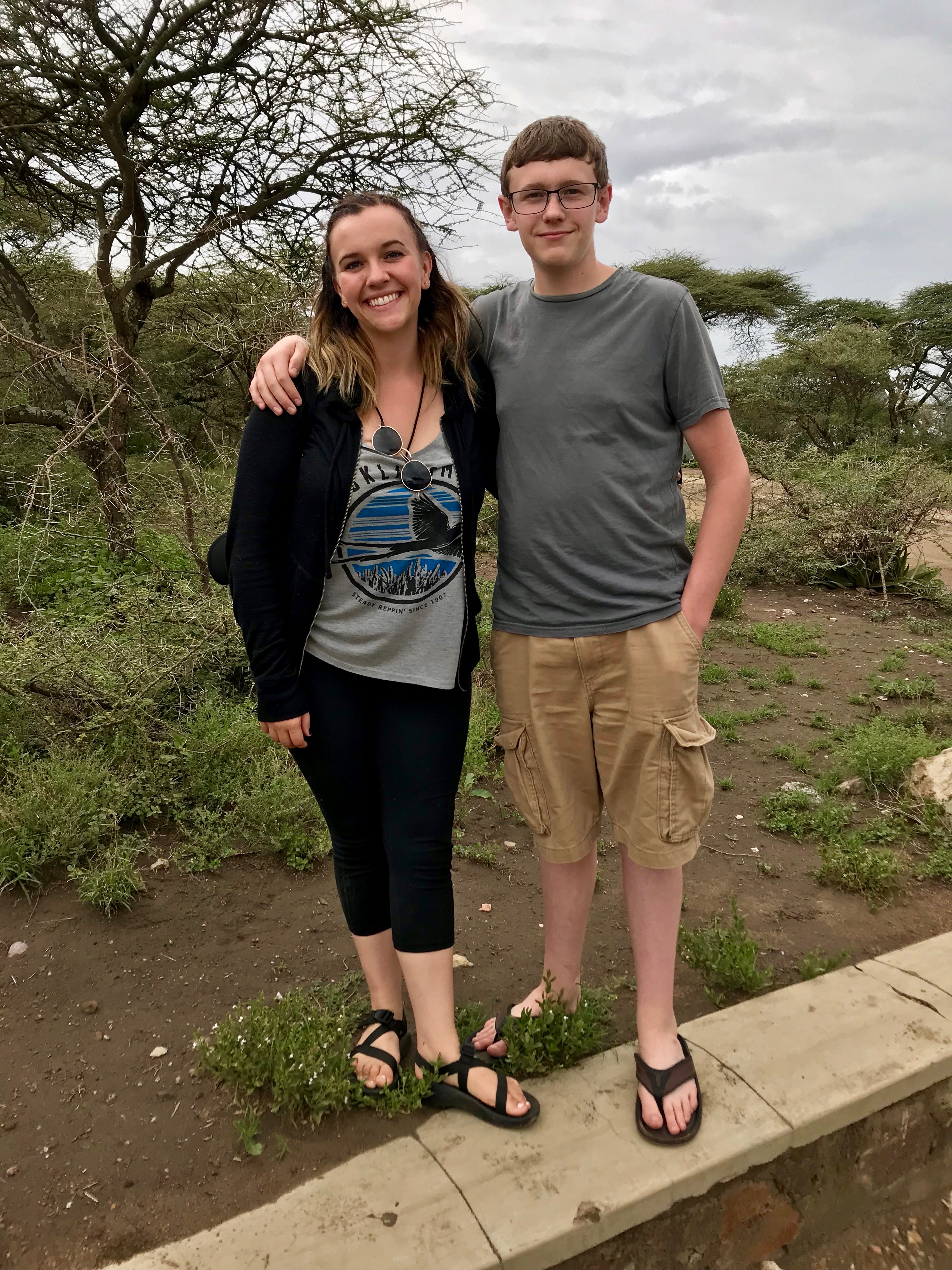 My little, not so little, brother. He told me that Safari is the coolest thing he has ever done. I agree.  In a perfect world, I’d be on Safari 24/7.

If you know me, you know I don’t sleep on the ground. So, when I say that I stayed in a tent in the middle of the Serengeti, let me show you what kind of tent I’m talking about. 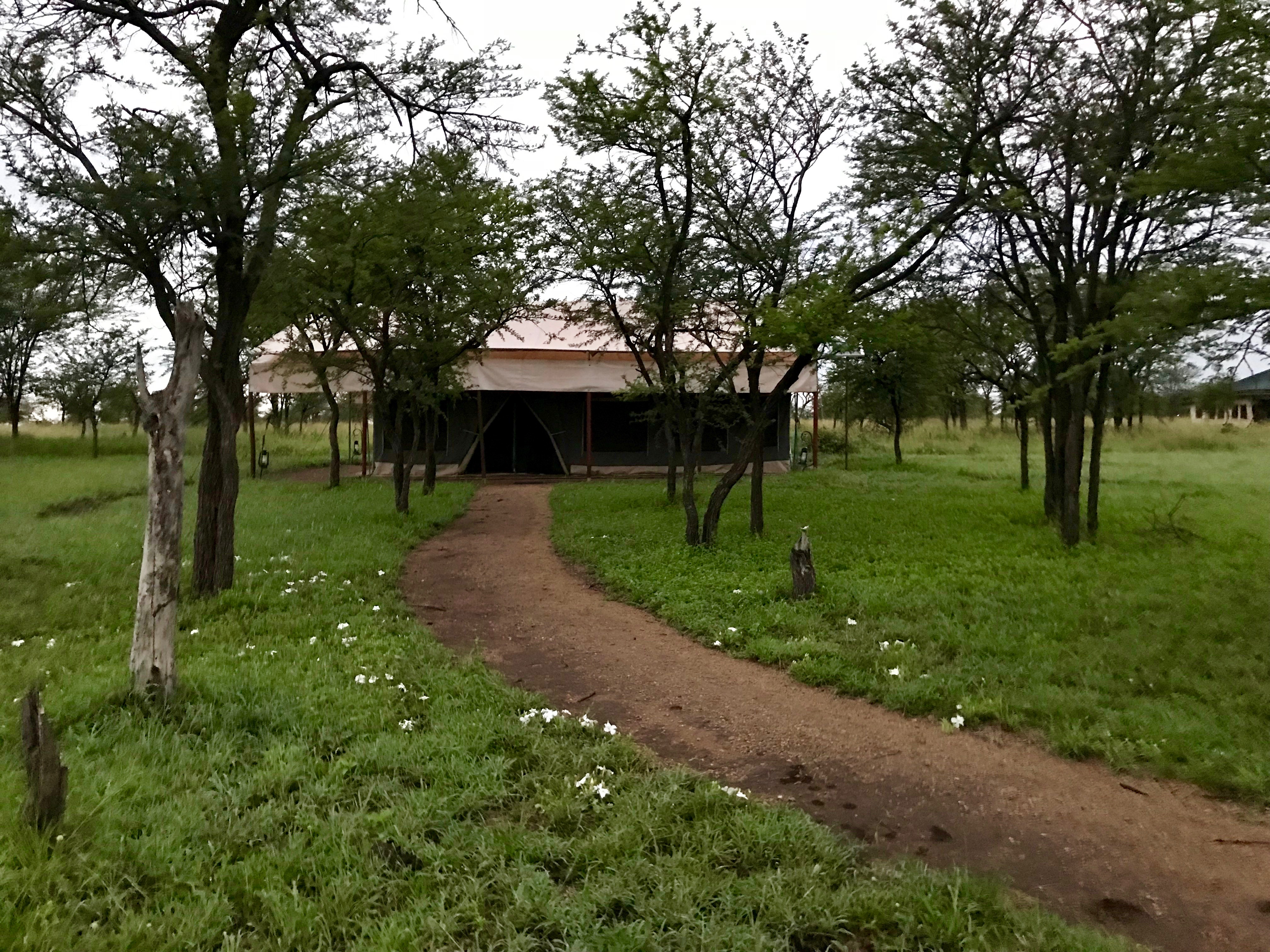 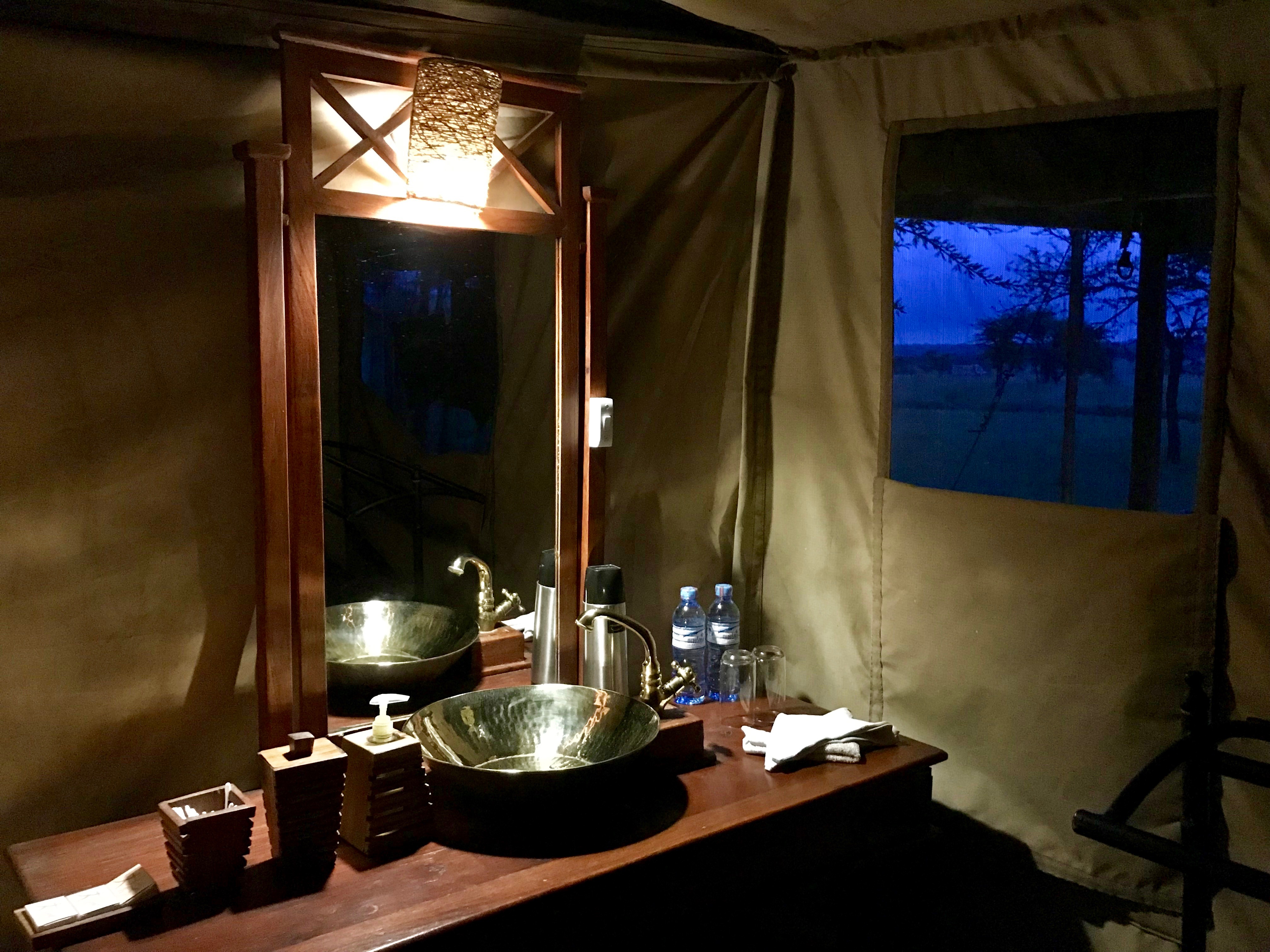 And that’s how it’s done!  Pictured below was my morning view out the tent. 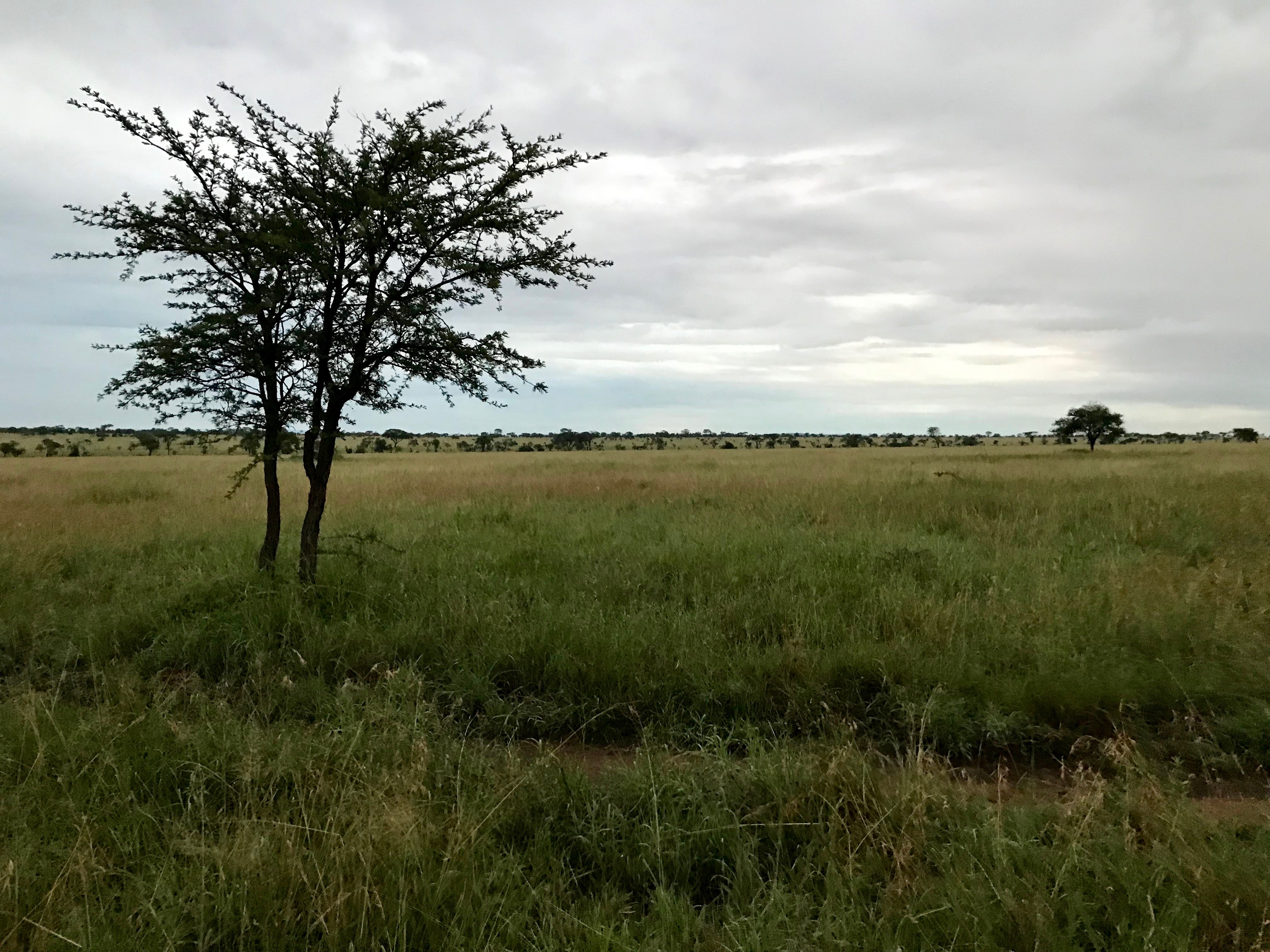 Our family friend, Trent, joined us. What fun it was to have him along for our crazy family adventure.

Montana is SO PRETTY! No question, but I fell in love with TZ when I saw the landscape pictured for the first time one year ago. TZ is into its rainy season now which means I am on spider lookout like never before, but man the green grasses and blue rain-filled skies are what postcards are made of.

“God spoke: “Lights! Come out!
Shine in Heaven’s sky!
Separate Day from Night.
Mark seasons and days and years,
Lights in Heaven’s sky to give light to Earth.”
And there it was.

16-19 God made two big lights, the larger
to take charge of Day,
The smaller to be in charge of Night;
and he made the stars.
God placed them in the heavenly sky
to light up Earth
And oversee Day and Night,
to separate light and dark.
God saw that it was good.
It was evening, it was morning—
Day Four.” 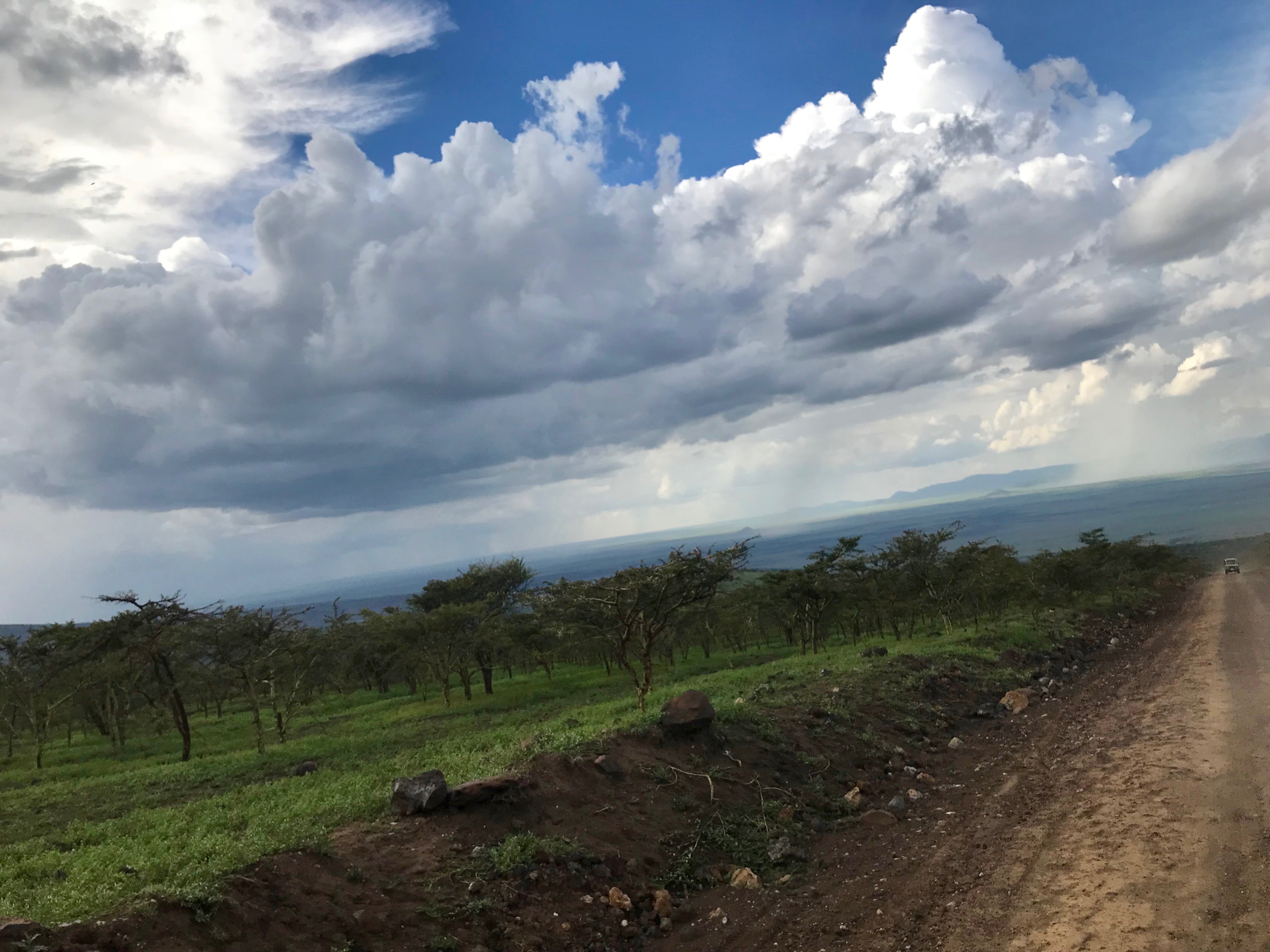 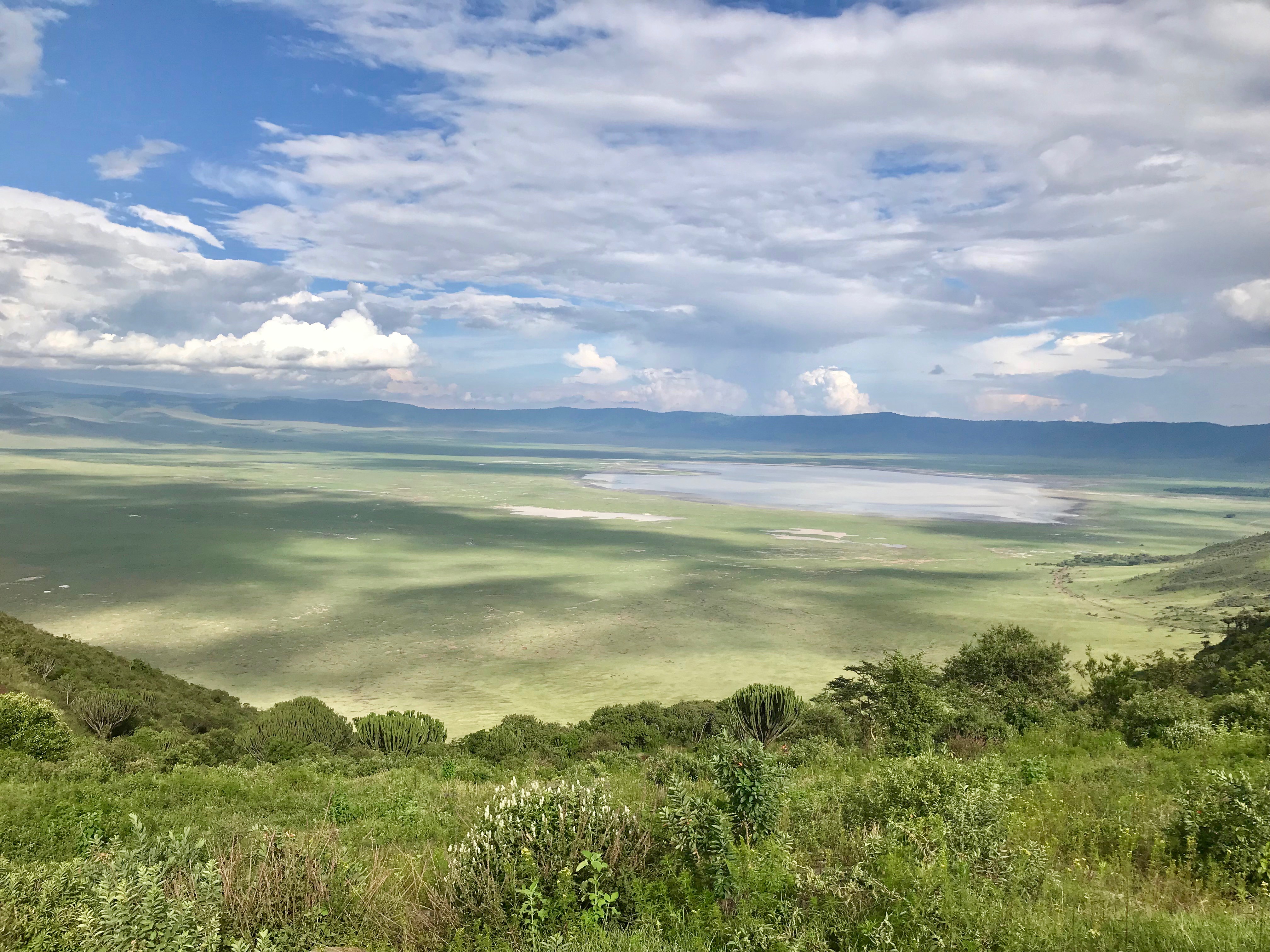 Looking out over the Ngorongoro Crater at 2,000 feet deep. 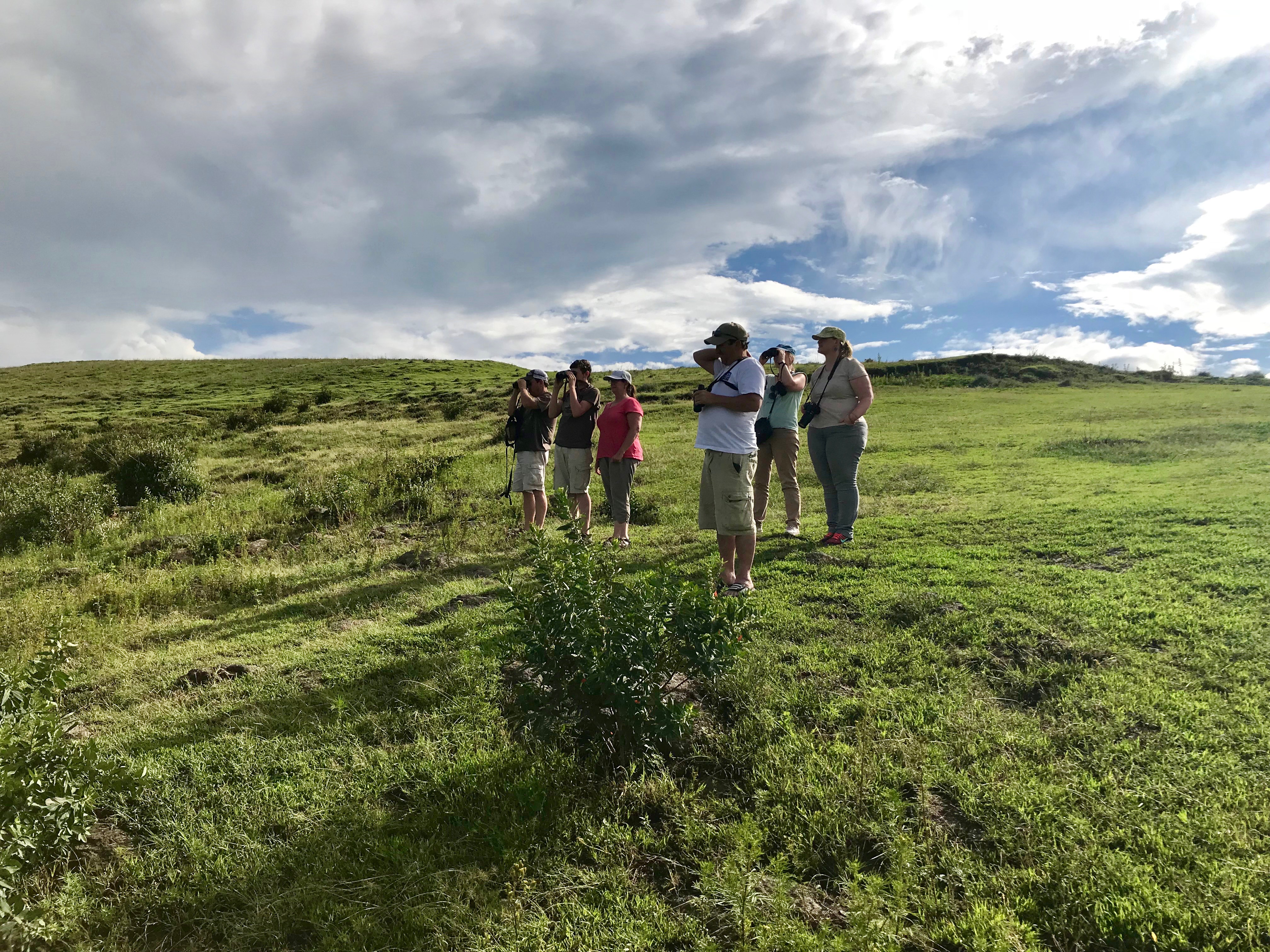 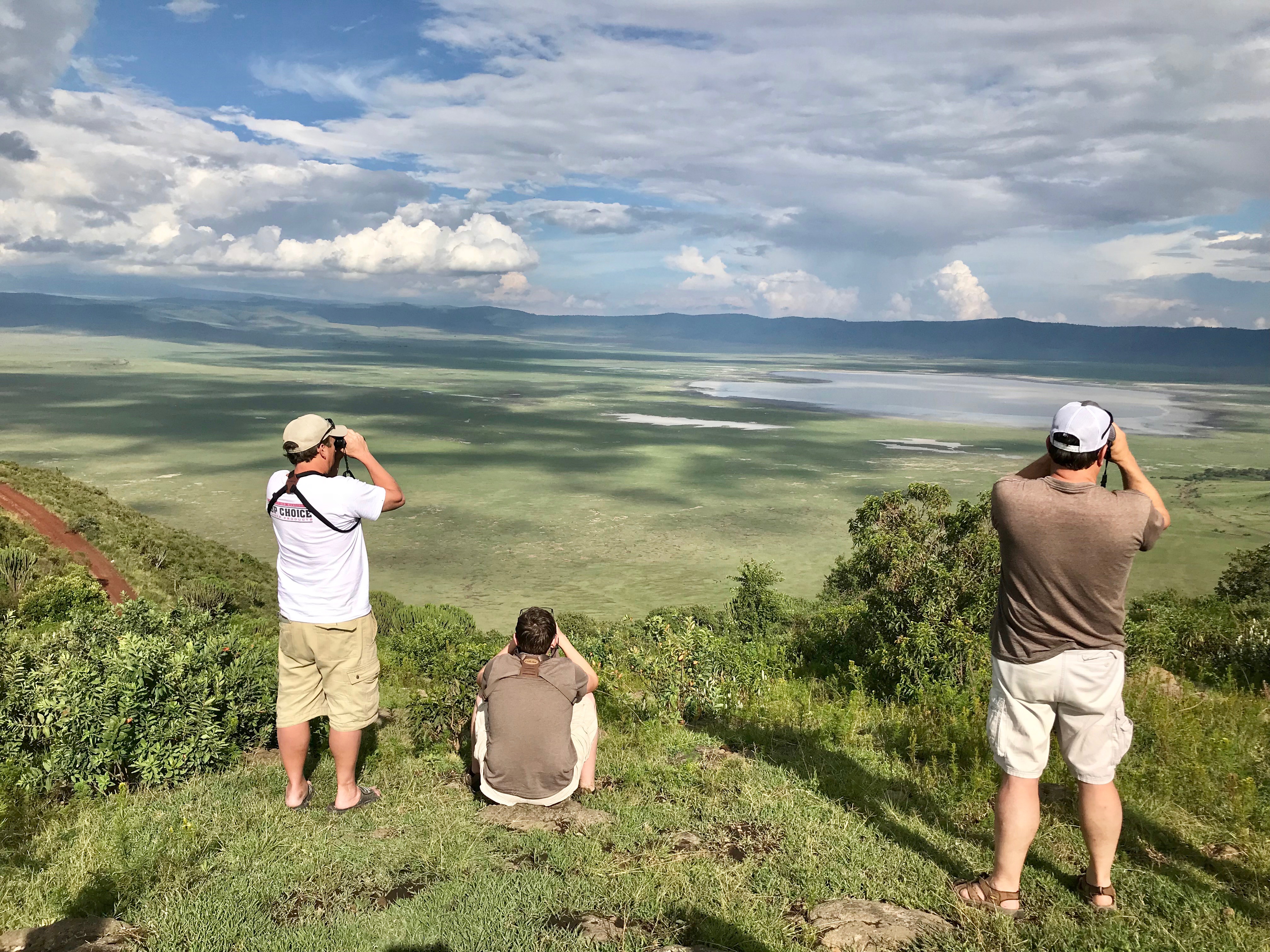 We had plans of visiting the Hadzabe Tribe, but as you can see by the pictures below the road washed out.  The guys worked two hours in the rain trying to fill in the hole, but there was no passing.

“God spoke: “Swarm, Ocean, with fish and all sea life!
Birds, fly through the sky over Earth!”
God created the huge whales,
all the swarm of life in the waters,
And every kind and species of flying birds.
God saw that it was good.
God blessed them: “Prosper! Reproduce! Fill Ocean!
Birds, reproduce on Earth!”
It was evening, it was morning—
Day Five.”

No better time to read than in the middle of a rainstorm.

God spoke: “Earth, generate life! Every sort and kind:
cattle and reptiles and wild animals—all kinds.”
And there it was:
wild animals of every kind,
Cattle of all kinds, every sort of reptile and bug.
God saw that it was good.

26-28 God spoke: “Let us make human beings in our image, make them
reflecting our nature
So they can be responsible for the fish in the sea,
the birds in the air, the cattle,
And, yes, Earth itself,
and every animal that moves on the face of Earth.”
God created human beings;
he created them godlike,
Reflecting God’s nature.
He created them male and female.
God blessed them:
“Prosper! Reproduce! Fill Earth! Take charge!
Be responsible for fish in the sea and birds in the air,
for every living thing that moves on the face of Earth.”

29-30 Then God said, “I’ve given you
every sort of seed-bearing plant on Earth
And every kind of fruit-bearing tree,
given them to you for food.
To all animals and all birds,
everything that moves and breathes,
I give whatever grows out of the ground for food.”
And there it was.

31 God looked over everything he had made;
it was so good, so very good!
It was evening, it was morning—
Day Six.

This is me enjoying a perfectly pretty yet imperfect world.